A Glimpse Into The History Of Auctions 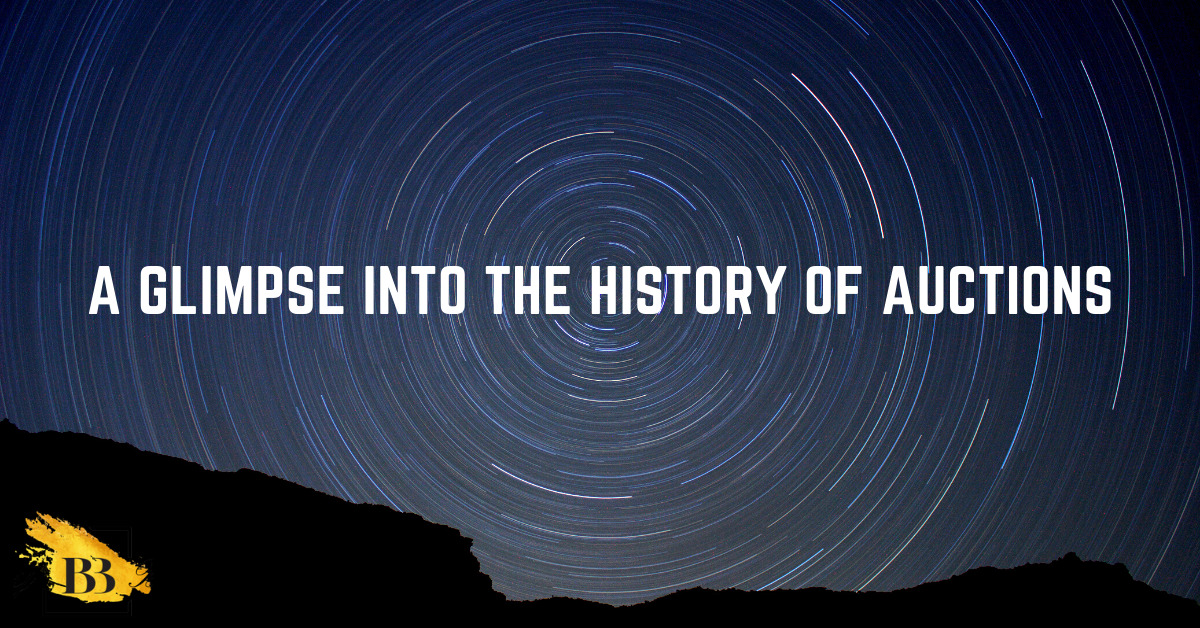 The word auction derives from the Latin word known as ‘augeo’ which means “I increase my bet” or “I argue that”.  An auction is the process in which buying and selling is done with the help of bidding. Highest bidder wins. However, after years and years of evolution; today, we can observe various types of auctions. This makes us wonder… where did it all get started?

Auctions have a long history. In this article, we will take you through a showing of auctions throughout time. You will learn how auctions were used in the past.

Did you know that auctions have been around since 500 B.C.? Isn’t that surprising? Let’s take a step back in history.

We can trace auctions all the way back to 500 B.C. – They utilized auctions for marriage and it was even considered part of the legal process. The most beautiful woman would be auctioned first. This was normal practice in Babylon at the time.

The auction would take place and the purchaser would bid to choose their wife. The buyer could get a different wife if he could not get along with his new wife. It is unknown whether or not they got their money back for a returned wife.

Roman soldiers used an auction method to sell their property and estate goods that they needed to liquidate. While within the Roman Empire, the Romans would auction off slaves and household furniture to pay off debts.

During 193 A.D., the Roman Empire itself was put on auction by the Imperial Roman Army. The Empire was then handed to the highest bidder — Didius Julianus, who purchased each guard for 6,250 drachmas outbid everyone.

Auctions have been a leading method of liquidation since the beginning of time.

In some parts of England, auctioning goods by candle started to gain popularity. The auctioneer would light a candle and this acted as a timer for the auction. Everyone would bid on the item and the last bid had to be made before the candle went out. This ensured that no one would know when the auction would end. This type of auction is interesting. Artwork auctions also took place at taverns, coffee shops, and houses in the same manner during this time.

Located in Stockholm, Sweden, Baron Claes Rålamb is known as the first-ever auction house. This auction house opened in 1674.

The world’s largest auction house to ever exist was in London. James Christie started this in 1766. Soon, he published the first auction catalog in history. Auction houses gained popularity and are now seen worldwide.

The second-largest auction house to ever exist was founded in London as well. It was founded on March 11th, 1744. This house was founded when Samuel Baker was supervising the disposal of hundreds of rare items. There was numerous valuable books from the library.

Once a man tried to sell New Zealand:

In 2006, the entire country of New Zealand was listed by a cheeky Australian for sale. Later when the bidding process started, the initial price was set at 1 cent. The price only raised to $1300 for such a beautiful country. But within time, the auction was recognized as a violation of eBay’s conditions and terms. Thus, it was soon removed from the listing. People try to sell anything!

American auctions started in 1600 at the time of the Pilgrims’ arrival on American’s Eastern shores. Auctions became much more popular during that time and locals started selling their imports. This included livestock, crops, tools, tobacco, and more. There was a lot of property auctioned off during this time.

Selling at an auction was considered one of the most efficient and fastest way to turn your assets into cash form. The author Bellamy Partridge says in his book, “Going, Going, Gone”, “the Bible and the beaver were the mainstays of the Pilgrims, the Good Book saving their souls, and the beaver paying their bills.”

The fur was brought from the Native Americans during the fall season for the exchange of money. Later the raw pelts were sent to the closest shipping ports. Then during the spring season an auction was held each year and the pelts were sold via auction. European merchants from the transcontinental trips were the main ones bidding. The pelts weren’t done being exchanged between hands. Next, the ships were sent to ports in Europe where the pelts were again auctioned to the manufactures. The manufacturers would then process them in to various things for retail stores.

These early fur auctions played a major role in the development and settlement of North America.

There are several ways that shows how popular auctions as a method of liquidation are. Do a simple search of “upcoming auctions in my area” and you will be amazed at the number for auctions that are always happening. There are numerous auction companies in and near Kansas City to help you if you are in need. Be sure to keep us in mind. We at Busy Beever are proud to be Kansas City’s premier auction and estate sale company.

Auctions are a great way to buy or sell anything you want.