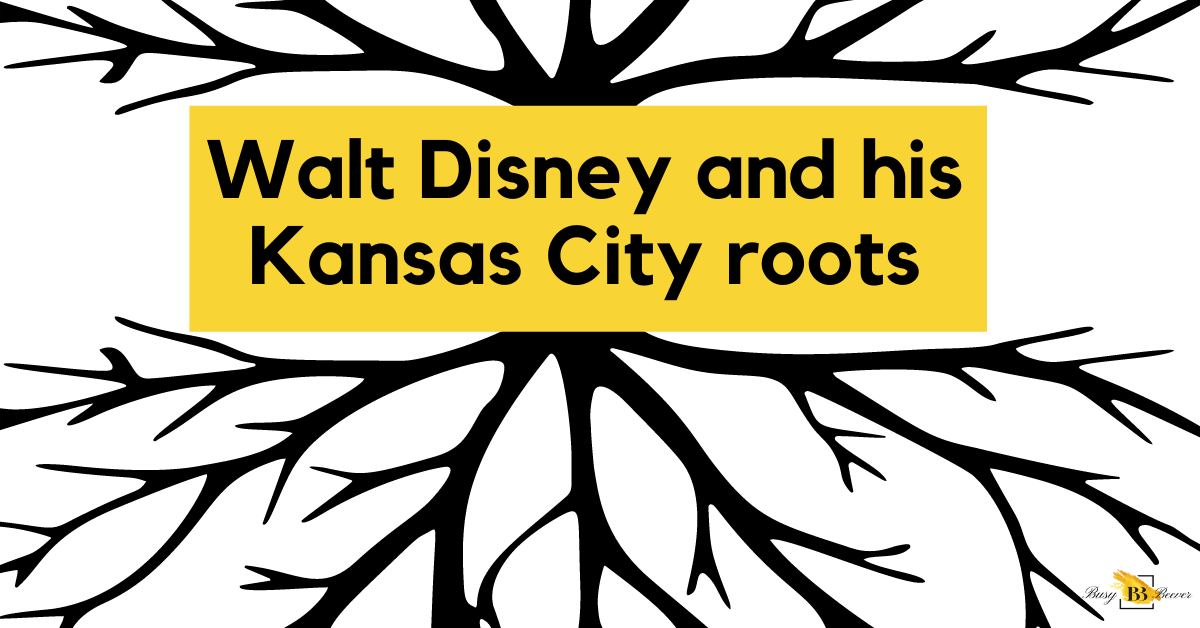 Walt Disney’s roots run deep. Especially in the Kansas City area. He is a local hero, and his achievements are iconic. His unrivaled creativity has fascinated generations and will fascinate many more generations to come.  He’s iconic in so many ways. He created groundbreaking cartoons and opened the most captivating amusement parks in the world. Walt Disney’s influence has spread to many different ages of people all across the world —This influence didn’t come easily for Disney.

There seemed to be no free passes or lucky fortune in Walt Disney’s life. He had to climb his way to the top in the good old American fashion way – hard work and dedication. He was a dedicated paperboy to start and made his way to be a dedicated owner of all Disney cartoons and theme parks. In this article, we will take a look at the life of Walt Disney and his connections with Kansas City.

Walter “Walt” Disney was born on December 5, 1901, in Chicago, Illinois. After Walter was born, his father, a stern and pious person, was employed in a construction company. His father purchased a property in Marceline, Missouri (About one hour and forty five minutes from Kansas City), and relocated the children there. This property in Marceline where he grew up influenced him in a lot of ways. The presence of animals in this smaller town with a lot of farmers helped him gain an affection for animals.  Life wasn’t easy for Walt as his father frequently physically assaulted him and the other kids. The Disneys left Marceline in 1911 following the failure of their property. The family relocated to Kansas City, Missouri, and Walter assisted his dad with delivering newspapers. Eventually, Walt saw Walter Pfeiffer, a member of a motion picture-obsessed society. Walt and Walter used to go to the nearby theatre a lot. Walt also began working as a newsboy distributing the Kansas City Times. This was the time when a connection between Walt and Kansas City itself was developed. He often served on the train connecting Kansas City and Chicago, Illinois. He would peddle candies and papers in the area. Throughout this period, he started drawing and attended a few art classes.

Young Walt Disney was infamous for not finishing his assignments and dozing off in the classroom. This was due to his employment and weekend sessions at the Kansas City Arts Center. Despite this, he held his newspaper position for a long time.

Coming Back To Kansas City

Walt left Kansas City for a while but he chose to return to pursue a profession as an artist. His initial professional employment was at the Pesmen-Rubin Art Gallery, which he was able to get with the help of his elder brothers. Walt encountered artist Ub Iwerks at Pesmen-Rubin, and the two agreed to establish their new advertising organization, Iwerks-Disney Commercial Artists. This did not end up being a long lasting venture. Walt took temporary work with the Kansas City Film Ad Agency to maintain himself after their firm failed, and Iwerks quickly joined. Walt got fascinated with animation and aspired to become an animator while working in the Ad Company.

Disney became ready to purchase his first production building as a result of the cartoons’ early success, allowing him to make more comics and recruit more artists. The corporation’s prosperity was short-lived, unfortunately, as it went bankrupt due to bad financial administration.

Without anything more to do in Kansas City, Walt and Roy joined their resources and relocated to Hollywood, where they established the Disney Brothers Studio. Iwerks and Lillian Bounds were recruited by Walt to serve at the company. Walt and Lillian began a relationship quickly and engaged and married later. On December 18, 1933, the family gave birth to their first baby, Diane Marie Disney, and on December 31, 1936, they adopted a second kid, Sharon Mae Disney.

Oswald the Lucky Rabbit has been the producer’s debut big hit. However, the company lost the copyright to Oswald and several of the corporation’s artists to Oswald producer, Charles Mintz, when demanding a good payment for creating Oswald animations in NYC.

Walt was once on a train soon after relinquishing the copyright to Oswald and started sketching the initial designs of Mickey Mouse. Mickey was featured in three short films produced by Disney Brothers Studio. One of the films was a huge success and marked the first time the company used audio in its animations.

Walt began concentrating on creating full motion pictures after the popularity of Mickey Mouse and animation clips. This represented the start of what several regard as the Walt Disney Company’s new era. Throughout that period, Walt Disney released Snow White and the Seven Dwarfs that was a box office success. Even though the company failed throughout World War II, it managed to reclaim success after wartime with films like Cinderella.

Kansas City was never forgotten by Disney. Walt sent letters to Public Library’s in the area in the 1930s and visited Kansas City quite often. We will never forget Walt Disney and his impact and roots in the Kansas City area.

THANK YOU FOR READING. A LOT OF OUR AUCTIONS AND ESTATE SALES ARE JAM PACKED WITH DISNEY ITEMS.